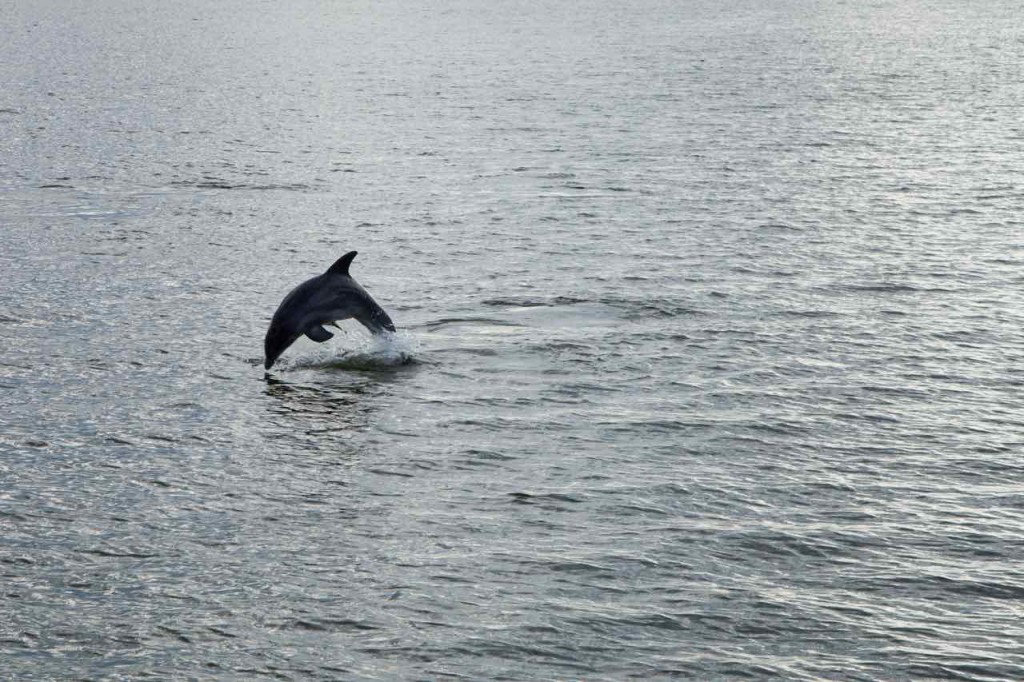 10 years ago I attended a ‘train –the –trainer’ programme. On day 1, the trainer told us the ‘Parable of the Porpoise’. This story turned the 3 weeks into an unforgettable experience. Having lived that experience, turned me into a ‘believer’. And since then, I just have to share it with everybody I meet.

The ‘Parable of the Porpoise’ is originally from Gregory Bateson. Please find the short version below, in my own words.

The parable of the porpoise explains how dolphins learn. (By the way: a porpoise is a type of dolphin).
Everybody has probably seen a dolphin show, live or on television. Often, there are two ‘pools’: the ‘show’ pool and the ‘living’ pool, where the dolphins go after the show is over.
Whenever a dolphin goes to the ‘show’ pool for the first time, the trainer doesn’t tell it what to do. He just observes. Whenever the dolphin does something that could be seen as a trick (eg: it does something with its tail), the trainer does 2 things: he blows his whistle and gives the dolphin a fish. The dolphin is happy but doesn’t really understand why it got the fish. However, when he does the ‘tail thing’ again, the trainer does the same thing: he blows his whistle and gives the dolphin a fish. Now the dolphin gets it. For the rest of that session it will be rewarded whenever it does the ‘tail thing’.
When the next session starts, the dolphin enthusiastically does the ‘tail thing’ but… nothing happens. ‘Maybe the trainer didn’t see it’, the dolphin thinks and it tries again, this time right in front of the trainer. Nothing… The dolphin gives up and swims away… A little bit later, the dolphin happens to do something else: it jumps. The trainer blows his whistle and gives a fish. And the dolphin understands it’s being rewarded for the new behaviour.
To cut a long story short, this happens 14 times. Each time the dolphin comes back to the ‘show’ pool, it will do the trick from last time and it will be disappointed when it is not being rewarded. Every once in a while the trainer will give a fish (without the whistle) to keep the dolphin happy. The 15th time, however, something happens: it’s as if the dolphin ‘got’ it. When it comes into the ‘show’ pool, it does 8 things it has never done before, 4 of which were never done by a dolphin! And this is where the ‘parable’ ends.

After telling us the story, our trainer said that this was a metaphor for positive feedback. And… that during our programme, the only type of feedback we would give and get would be … positive. After every exercise, we were supposed to give each other a ‘fish’. A ‘fish’ was a little piece of paper with 2 names and 2 (half) sentences.

Further instructions were: you should always be able to find a fish and… you had to be honest!

I can assure you there was quite some resistance in the room. ‘What? Only positive feedback? How will I know what I do wrong?’
I have to admit I wasn’t completely convinced myself. I was totally in favour of positive feedback but… in combination with negative feedback. Unfortunately, only fish were allowed…

Let me give you an example:
Imagine: 4 people are doing an excercise together and 3 of them have to write a fish for the 4th one: John.

Fish 1:
Dear John,
I’ve noticed you have good eye contact.
I like it because I felt spoken to personally.
Person 1

Fish 2:
Dear John,
I’ve noticed you have good eye-contact.
I like it because it helped me to stay focussed.
Person 2

Fish 3:
Dear John,
I’ve noticed you gave good examples.
I liked it because it helped me to understand the theory better.
Person 3.

As you can see, it’s possible for 2 people to observe the same behaviour, which can have a different effect on them.

You’ll be curious to find out what happened during our course. Well, we only received positive feedback and still improved! How? Let’s go back to the example given above: suppose I am not so good at keeping eye contact. But… now that I’ve experienced the effect of it, I’m more likely to pay attention to it in the future! I will also pay attention to using good examples, etc…

So we were both getting better AND enjoying the lovely compliments… What more can you wish for?

Convinced? Give it a try. Next time I’ll come back with some practical tips on how you can use the fish in your daily life, both at home as in the office!

You can find the original version here: ‘The Parable of the Porpoise’

(Credits to Table19 Stock for the photo)

← Being grateful
Tips and tricks for better fish! →

2 Responses to Everybody likes a fish