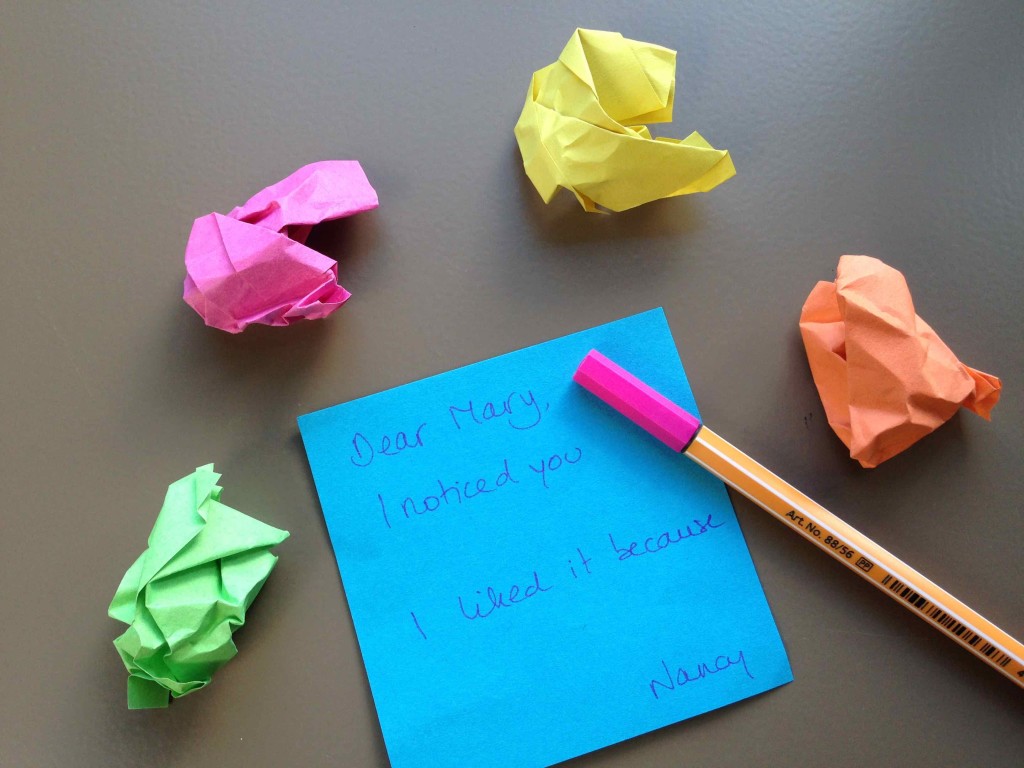 Two weeks ago I already told you about my favourite technique to give positive feedback. If you need a little reminder, you can read that blog here.

You’re still feeling some resistance
Well, I totally get it. Every year I tell this story in my trainings to hundreds of people. Most of them are a bit sceptical (to say the least!). Sighs, rolling eyes, I see it all! Until they read the fish that they received from their fellow-participants… That’s the moment many of them change their mind…

Practice makes perfect
Some of my courses take longer: several modules over several months. Usually I explain the technique during module 1 and then they get to try it out. During module 2, there is a second round. Often I notice that it gets easier for most people. It’s something you can learn. You get better in observing and stating certain behaviour. It becomes more natural.

You’re making it harder than it is
You want to say something ‘deep’, you find it difficult and therefore… you don’t say anything… When it comes to fish, you really want to keep it simple. You want to be as specific as possible. Somebody said something, did something and… for one reason or another, you liked it! And you want to share that.

You’re too general
This one is a bit linked to the previous one. You say something like: “I’ve noticed you are very friendly”. That is too general. What is it exactly that this person does that makes you say he/she is friendly? Did he smile at you? Did he ask if you were feeling ok? Be precise!

You can’t find anything positive to say about this person
He or she has probably been getting on your nerves for a while. And that’s why you can now only see the negative. As a first step, you might want to accept that there are some things that are bothering you (no point in denying that…) AND , at the same time, actively look for something positive. The smallest thing will do. Your other colleagues seem to like him… What do they see in him? It’s worth a try and in the end you’ll win too: as long as he gets on your nerves, you experience stress… Focussing on positive things = less stress!

You are worried that, if you give too many fish, the person will stop doing his best
Maybe he’ll get arrogant? In my experience, this is not the case. People like to be appreciated for what they do. The (working)relationship will improve and … giving fish does mean that you are no longer allowed to give (constructive!) negative feedback … In my view, there is room for both!

You are only giving fish when you need something
In that case I’m afraid you didn’t really get it… At that moment you are using it to ‘manipulate’… And don’t worry: people will pick up on it. Fish are supposed to be honest, if not they start to look like piranhas or jelly fish…

So… just get into the habit of giving more fish. At first you might have to plan for it (eg. ‘I will give one fish a day’ or ‘Today I really want to give on to x’). And you’ll see: after a while it becomes easier, fish come spontaneously and … both you and the receiver will have a lot of fun!

If you have any other tips to make this practice easier, please share below!

← Everybody likes a fish
Mindfulness →