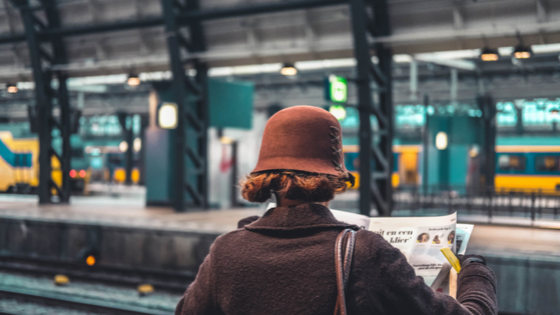 (Photo by Raphael Ferraz on Unsplash)

A couple of weeks ago I was taking the train to Breda to spend some time with a friend.
I was changing trains in Antwerp-Berchem and had some time to spare. I decided to go and buy something to eat. On my way back to the platforms, there was a lady standing in the middle of the station, who asked:

I was in no rush and something in her voice and intonation told me she could probably use my help.
So I stopped and said yes.

She told me she was on her way to Rotterdam and asked me to confirm the train was leaving from platform 10. I told her it was and that I was taking the same train. “Oh, could you tell the train conductor that I need a seat close to the toilet?”

On our way to the platform, she kept on talking. Her name was Linda* (“What’s yours?”), she was on her way to Rotterdam, she was celebrating her birthday on Monday, …
After each sentence she waited for a bit, just in case I wanted to say something too, and then she just went on.

When we arrived at the stairs to the platform, she said: “Can you carry my suitcase?” The escalator was not functioning. I did as I was asked. I remember being a bit surprised.

Once we arrived at the platform, we still had 10 minutes. She kept on talking.
She had started her trip at the seaside, trains were her passion, she had recovered from cancer a couple of years ago (hence the need to sit close to the toilet), …
I didn’t have to say a lot. Nodding every once in a while was enough.
Sometimes she asked me a question: “where are you going?”. Followed by “oh, yes, you already told me…”
At some point she handed me a bottle of water: “Will this leak?”. Then it went back into her bag.

The train arrived. I lifted the heavy suitcase onto the train. And then we were on our way to a seat next to the toilet.

It was a Dutch train, so I was less familiar with the layout. We had to cross some carriages and at some point, it was not really clear whether we were in 1st or 2nd class. I asked a lady who was sitting next to the door. She didn’t understand me since she was English speaking. It turned out to be 2nd class.
As soon as Linda followed me into the carriage, she said: “I want to sit there”, pointing at where the English-speaking lady was sitting. As she was about to ask, I interrupted her (also because I knew the lady didn’t speak Dutch) and told her she could also sit elsewhere…

“But I don’t want to go backwards”, she complained.

I told her there were plenty of other seats going in the right direction.

We found a spot. I put her suitcase first and she sat next to it. I sat down one row ahead, going ‘backwards’.

When we stopped for the first time, she asked the person on the other side of the corridor where we were. He didn’t speak Dutch (international train and all…).
She didn’t give up.
“I’m going to Rotterdam”. The man just nodded his head.
“I’m Linda. And who are you?”. He kept looking at her with a smile.
She repeated it again, possibly she pointed at herself (I couldn’t see that). He understood and also told her his name.
She kept on talking for a while but then the conversation ended.

A little later she took the bottle of water out of her bag and asked somebody else: “Can you help me to open this”. Of course, they could.

The conductor passed by and she told him she was going to Rotterdam. And that she needed to be close to the toilet.

The train arrived in Breda. I said bye to her and wished her a nice weekend. I also told her she needed to get off at the next station. She seemed to have forgotten about me.

I got off, found my friend and … we started to chat. But Linda stayed present at the back of my head.

In the afternoon I brought it up again: “I don’t know why but… she’s triggered me somehow”. After talking about it for a while, I realised that maybe I was a little bit jealous of Linda and that I (and many others), could learn a thing or two from her…
Even though I’m an assertiveness trainer…

Lesson 1: Ask for what you need
For instance: Can you help me with my suitcase? Or with the water bottle?
Do I always do that? No… oftentimes I think I (first) have to try it on my own…

Lesson 2: Ask for what you’d like
For instance: I want to sit there (where the English lady was sitting).
What?! But there is somebody sitting there already?! Don’t be so difficult! Adapt yourself!
Maybe this lady was not ‘attached’ to that spot… Maybe she wouldn’t mind sitting elsewhere… Maybe I didn’t need to ‘protect’ her: she could say yes or no herself… Why did I have to decide for her?

Lesson 3: You can always ask
Linda had no problem asking things AND it would have been totally ok for her if somebody said no. She would have asked somebody else… Problem solved! Nothing ventured, nothing gained.
We (I?) sometimes wait too long to ask something and when we finally do, we are not very happy when the other person says no…

Linda was totally capable of taking care of herself, even when at first I had thought I had to take care of her…

Can you learn something from Linda?

I’d love to read it in the comments. ;-D

(*Linda is not her real name; it also sounded a bit better (in combination with ‘lessons from…’ ;-D)

This too is developing your assertiveness!

Do you want to learn more? Sign up for the online assertiveness course here or… book me for an online 1-on-1 session here.